It is all too obvious that estrogen dominance is at an all time high.

Many overweight men now carry body fat in a similar manner to overweight women— with excess fat in the hips, glutes, and thighs.

Women with high levels of fat storage in these areas are also clearly estrogen dominant and need to address hormone balance.

Other symptoms of estrogen dominance in men and women include:

Estrogen dominance rises when men fail to produce enough testosterone to keep estrogen levels in check. In addition, men often have high estrogen levels due to rapid conversion of testosterone into estrogen via aromatase enzymes. High exposure to xenoestrogens, stress, poor diet digestion issues, smoking, and alcohol consumption are among the other common reasons why both men and women have excess estrogen levels.

Mike Mahler's Aggressive Strength Estrogen Control (EC) will ensure you achieve all of your health and fitness goals by controlling estrogen.

It consists of potent extracts of Turmeric, Brassaiopsis Glomerulata, and Prunella Vulgaris. These are the three most effective natural ingredients for battling estrogen dominance.

Turmeric alone is a very effective estrogen blocker. It works by forcefully blocking estrogen receptors on the cellular level. The correct extract of Turmeric is so strong that some studies have suggested that it may be even more efficacious than the drug Tamoxifen at lowering estrogen without any of the side effects.

Also because turmeric is poorly absorbed, BioPerine has been added to the formula to ensure you get all of the benefits.

In addition to being a powerful estrogen blocker, the benefits of turmeric are endless. Here are just a few:

This is an herb that has been used in China to relieve a variety of issues, including back pain and constipation. A few years ago, researchers ascertained that extracts of the leaves of Brassaiopsis glomerulata also have powerful anti-oestrogenic effects, making it a potent natural aromatase inhibitor. One study even showed it is as powerful as the leading aromatase inhibitor drug.

The same extracts used in the studies are also used in EC to ensure you benefit from the estrogen-blocking effects of Brassaiopsis glomerulata.

This has potent anti-estrogenic properties via activation of the aryl hydrocarbon receptor (AHR). AHR is involved in protein expression in the body and its activation has been shown to interfere with estrogen receptor alpha (ERalpha) due to direct cross-talk.

Prunella also has a variety of other benefits including:

You can now click here to optimize your hormones with Mahler's Aggressive Strength Estrogen Control. 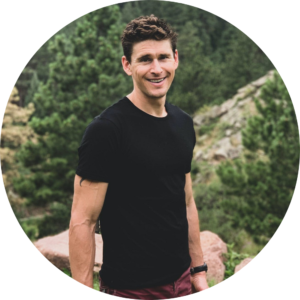 "Estrogen dominance affects probably more people than we actually realize.  And it’s been a big problem in the past few decades. Estrogen has been associated with breast cancer and endometrial cancer and progesterone has kind of this cancer preventive effect.  So, studies even show that women who have deficiency in progesterone have about five times more the risk of breast cancer and that’s directly an effect of estrogen- progesterone ratio being off. If you are a man who is resistant to weight loss and you’ve had your testosterone levels measured and they’re very low, you should look into your estrogen levels as well because those can tend to be high. You can get a form of estrogen dominance in men, too." — Ben

Learn more about hormones and ideal estrogen levels in women in these podcast episodes:

- 4 Things Your Saliva Can Tell You About Your Hormones.